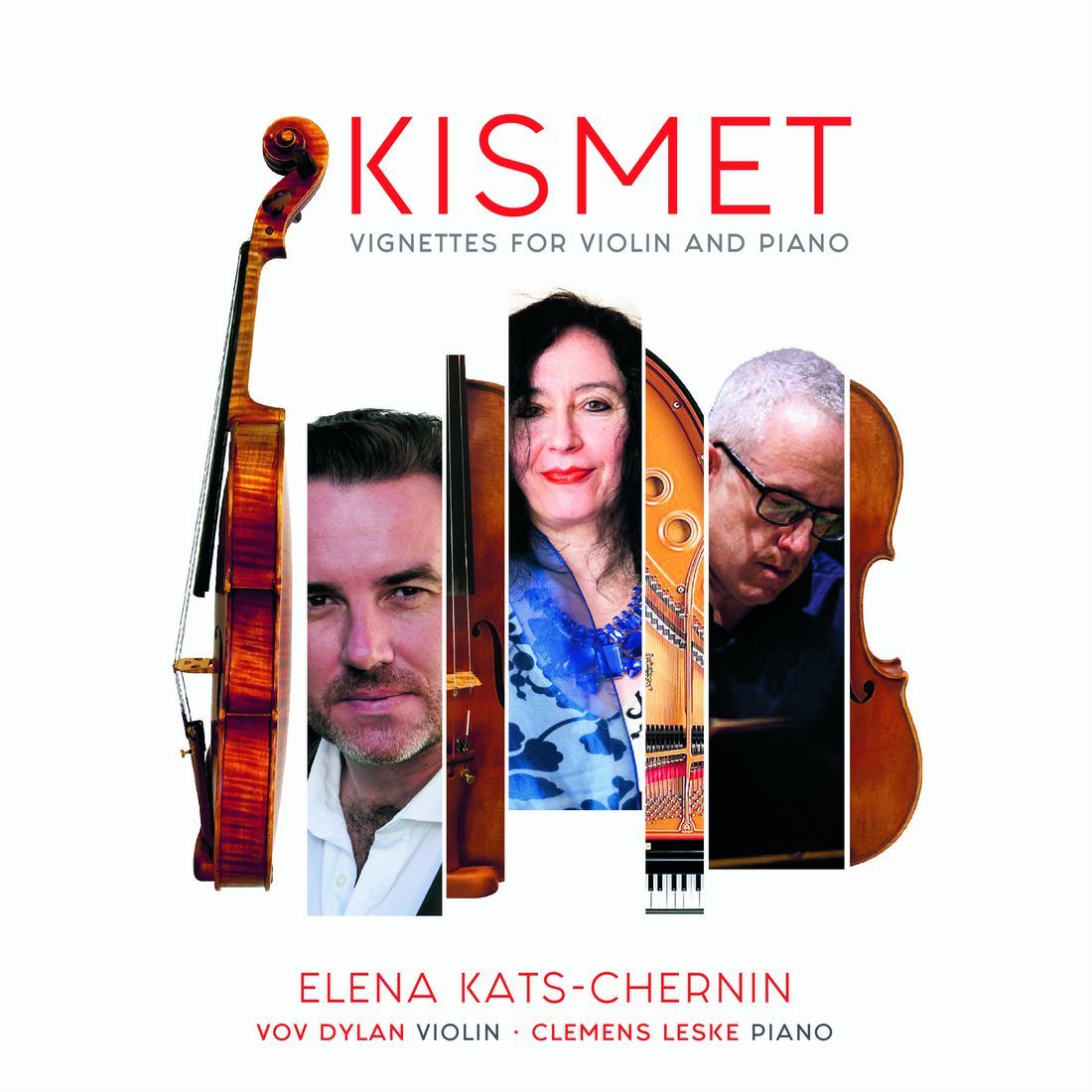 Kismet (For Two Violins and Piano)

Performed by Vov Dylan & Victoria Jacono-Gilmovich on Violin with Clemens Leske on Piano.

Kismet – Vignettes For Violin and Piano

4. Half Moon Prelude (For Violin Piano and Double Bass)

8. Eliza Aria (for Violin and Cello)

11. Half Moon Prelude (Version for Violin and Piano)

12. Kismet (Version for Violin and Piano)

This collection of over 10 new works, world premiers and associated performances was born from COVID inactivity, where Violinist Vov Dylan and Composer Elena Kats-Chernin found time to grow from musical friends to musical collaborators and in the process delving into the vast array of music that Elena has composed.

Renowned Australian Pianist Clemens Leske joined the project and together with Vov and Elena, a program of delightful, personal, playful and extremely musical vignettes was curated.

During the 2021 lockdowns, Vov, Clemens and numerous other guest performers were able to record these works. They have been recorded in extreme high definition and will be the first collection of works by an Australian Composer to be released in this format.

This collection is the first album of new music like this from Elena Kats-Chernin in over a decade and also marks the first artistic collaboration between Vov Dylan and Clemens Leske.

Elena Kats-Chernin AO is a Sydney based Australian composer.  Her music featured at the opening ceremonies of the 2000 Sydney Olympic Games and the 2003 Rugby World Cup. She has received several awards including Sounds Australian,  Helpmann, Limelight and Sydney Theatre Awards as well as the Sidney Myer Performing Arts Award 2013.

Her music has been performed by all the major Australian orchestras as well as many international ones, including London Philharmonic Orchestra and Swedish Chamber Orchestra.

Elena has written pieces for dance, opera, orchestra and chamber ensembles. Among her most well known pieces are Russian Rag and Eliza Aria from Wild Swans Suite, the latter of which was one of the ten items chosen to be part of The 2019 Sounds of Australia.

Violinist Vov Dylan, has been a touring, performing and recording artist from an early age. With performances and repertoire that capture everything from Classical to Contemporary, along with Jazz, Pop and World Music.

He has released to date 15 studio albums with Fanfare Classics which have sold in all major music stores and have been played on numerous Australian national radio programs as well as listed on all mainstream online music channels.

His Variety shows with Pianist Glenn Amer and the Palace Orchestra have led him to be nominated for "Australian Instrumental Entertainer of the Year" for 5 years running.

As teacher, Vov is frequently booked for masterclasses and orchestral workshops overseas - of particular note, with orchestras in Japan and Ghana where he joined with Pianist, Panos Karan, in a charitable project to create the first Youth Sinfonietta in Accra.

Since 2020, Vov’s projects have been more focused on a classical program starting with a sold-out performance of the Franck Violin Sonata at The Sydney Opera House.

Recently, during the pandemic, Vov began a journey into contemporary Classical Australian music which has led to collaborations, recordings and performances of music by Ann Carr-Boyd, Margaret Brandman, John Martin, Stuart Greenbaum and Elena Kats-Chernin to name a few.

The result of these collaborations is that in the course of 2022 and 2023 Vov is excited to be premiering and releasing approximately 40 brand new compositions by some of Australia’s most celebrated living composers.

Clemens Leske has performed with all six Australian symphony orchestras and played at venues in Spain, the UK, Singapore, New Zealand, the US, Hungary and China. He has appeared regularly with the Australian String Quartet and the Australian Chamber Orchestra, the Moscow Virtuosi and at the Bang on a Can and Focus festivals of new music in New York City. For his London Royal Festival Hall début he performed Rachmaninoff’s First Concerto with eh London Philharmonic Orchestra. Other recent appearances include performances of Mozart’s “Elvira Madigan” piano concerto, Strauss’ Burlesque, Rachmaninoff’s Third piano concerto and Beethoven’s triple concerto under the baton of Vladimir Ashkenazy and the Sydney Symphony, and a national tour in partnership with legendary flautist Sir James Galway.

Four albums of solo piano works ranging from Chopin and Schumann to Debussy and American composer William Duckworth will be released in 2022. For the past four years he has been principal pianist of the Omega Ensemble and he very much enjoys his work in teaching and research at the Sydney Conservatorium of Music. Much of this has included world premiere performances and recordings of Australian composers such as Ross Edwards, Carl Vine, Christopher Gordon, Roslyn Page and Elena Kats-Chernin.

Vladimir Ashkenazy states: “Mr Clemens Leske is in my opinion an extraordinary musician and pianist.” Life-long musical inspirations have been Erroll Garner, Sviatoslav Richter and his mother and father.

Victoria Jacono took up the violin when she was six. Millions of notes later, it still evokes the same wonder.

Jacono has found musical joy working with many orchestras, performing as concertmaster for The Metropolitan Orchestra, for the SBS radio and television orchestra, the Young Symphonists orchestra, the International Youth Orchestra in Spain 2001, the Sydney Sinfonia Orchestra and Eminence Symphony Orchestra. As a member of these orchestras, she has performed in Japan, China, Hungary, Austria, the Czech Republic, Slovakia and Spain.

Many of her performances have been recorded and broadcast on 2-MBS-FM, ABC Classic FM and Radio NZ. She regularly performs for charity, helping to raise money for the Exodus Foundation, the Oak Tree Foundation, the SADS foundation, the Malcolm Sargent Cancer Fund for Children and the Oncology Children’s Foundation.

Jacono is active in contemporary music and has worked closely with many Australian composers to commission and help create new works, as well as performing and recording new music.